The Changing Face of the Smartwatch

The smartwatch has undergone an evolution over the last several years, and with increased support and features it’s becoming more desirable to a broader range of consumers. Below we’ll take a look at who’s buying, use cases, and what’s next…

While smartwatch owners have historically been predominantly male — 65 percent in June 2016 — female owner numbers are growing, according to NPD’s Connected Intelligence. As of January 2018, 58 percent of smartwatch owners were male and 42 percent female among U.S. adults 18+.

In addition to a growing number of female buyers, we’ve seen shifts in the income level of buyers. In June 2016, 36 percent of purchases were made by those earning less than $45,000 per year. While this may seem counterintuitive given the price point of these devices, it was likely driven by a large number of buyers in the service industry, including waiters, bar staffers, retail workers, who need a device to check incoming notifications when they can't reach for their phone during a shift. Currently, the share of buyers in the less than $45,000 per year category is about 23 percent, while the $100,000+ per year demographic now represents 42 percent of smartwatch owners, up from 26 percent in June 2016.

This shift indicates that the market is leveling out and overall, getting to the point where smartwatches have become a more mainstream device, with penetration among all U.S. adults at nearly 13 percent, representing a 4 percentage point increase from June of last year.

How are people using their smartwatches?

The number of uses for a smartwatch is continuing to grow; but for now, the primary application remains sending and receiving notifications and health/fitness tracking, as it’s easy for consumers to see value in these applications. When it comes to health/fitness tracking, the recent relaxation of FDA rules around these devices could be a boon for smartwatch manufacturers.

There are also implications on a larger scale, such as incentivizing smartwatch wearers to share their data with health insurance providers as a means of reducing premiums. Some providers have established programs where clients can earn smart devices or purchase them at discounted prices by hitting health-related metrics.

As smart home device sales continue to gain momentum, we expect to see the tie to smartwatches become more prevalent as well. Data shows that the percentage of smartwatch owners that are using the devices for controlling home automation on a daily basis is currently about 19 percent. 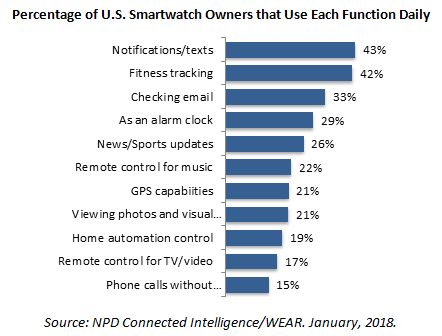 As tech improves — particularly OS capabilities — adoption will continue to increase. The addition of built-in cellular capabilities, for example, allowed the smartwatch to be used independently without having to have your smartphone on you. Eliminating ecosystem restrictions in this manner will make the use of these devices more seamless and thereby accelerate adoption. There are certainly advantages to a more independent device; and we will no doubt see other smartwatch OEMs following suit.