Port Washington, NY, August 17, 2017 – With the introduction of new devices, new features, and updates to hardware and operating systems alike, 2017 has brought a number of changes to the smartwatch market. As of June 2017, nearly nine percent of U.S. consumers aged 18+ owned a smartwatch, up almost 1.5 percentage points from the six months prior. Additionally, according to latest WEAR Report Industry Overview and Forecast from NPD’s Connected Intelligence, growth in the category will continue, with a nearly 60 percent ownership growth expected from Q2 2017 through Q4 2018, driven in large part by anticipated new product introductions from market leaders. This forecasted growth will result in nearly 15 percent of U.S. consumers aged 18+ owning a smartwatch by 2019.

Increasing features and capabilities are key differentiators for smartwatches, which will further contribute to their growth over the forecast period. While use cases such as receiving notifications/texts, activity tracking, and news updates are still the most highly reported among smartwatch owners; use cases such as controlling music, using as a device to control pictures and video, and home automation are growing. In fact, 15 to 21 percent of smartwatch owners are already utilizing their devices for those types of activities daily.

Percentage of Smartwatch Owners that Use Each Function Daily 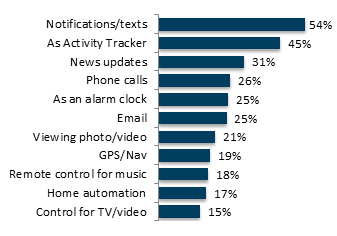 “Rumors of the smartwatch’s demise have been greatly exaggerated and we expect to see stronger growth in the next 18 months, compared to 2016,” said Weston Henderek, director, Connected Intelligence. “Many of the early growth projections for the smartwatch were, simply put, unrealistic. But in reality, a nine percent ownership level is a pretty healthy start for the market after just a couple of years. We expect the next round of product upgrades will lead to more first-time smartwatch purchases, as well as upgrades for those with existing devices.”

“While strong ownership in the lowest income category may seem counter intuitive, it is likely driven by a large number of buyers in the service industry who need a device to check incoming notifications when they can't reach for their phone,” noted Henderek. “Overall, increased features and functionality was the number one reason respondents chose a smartwatch over an activity tracker. Some of what we are seeing demonstrates a natural evolution of the device as a home control hub on the wrist, for one, and continued evolution of product capabilities will be key to winning over consumers.”

Methodology
The results of the NPD Group Connected Intelligence Wearables Survey are based on consumer panel research that reached 5,000+ U.S. consumers, aged 18+ from diverse regions and demographical backgrounds. They reported on awareness, ownership, and intent to own various wearable devices. Additionally, consumers with awareness were asked follow up details including the features and functions that they expect to see in these devices. This survey was completed in June, 2017.

About Connected Intelligence
Connected Intelligence provides competitive intelligence and insight on the rapidly evolving consumer’s connected environment. The service focuses on the three core components of the connected market: the device, the broadband access that provides the connectivity and the content that drives consumer behavior. These three pillars of the connected ecosystem are analyzed through a comprehensive review of what is available, adopted, and consumed by the customer, as well as reviewing how the market will evolve over time and what the various vendors can do to best position themselves in this evolving market. For more information: http://www.connected-intelligence.com.