The Broadband America project continues the work that we first started three years ago, when we published the Technology and Rural America report. That report provided an overview of technology adoption in more rural parts of the country and provided county-level analysis of broadband coverage.

The new Broadband America reports dive deeper into all facets of the technology situation in America and will be based around two key areas. The first is a deep-dive report on Broadband adoption in the continental United States; the second will look at technology and streaming adoption across the country, leveraging the first, broadband, report to provide context.

The report leverages multiple sources, including census, speed test and FCC data to provide a comprehensive view of broadband use at a county level across the continental United States. By combining these sources together, we are able to show not just if a county has broadband in use, but also provide an understanding of the relative download speeds being seen.

This information is layered against key demographic information, such as income levels, as well as how rural a particular county is – which can exacerbate broadband availability issues.

The report consists of: 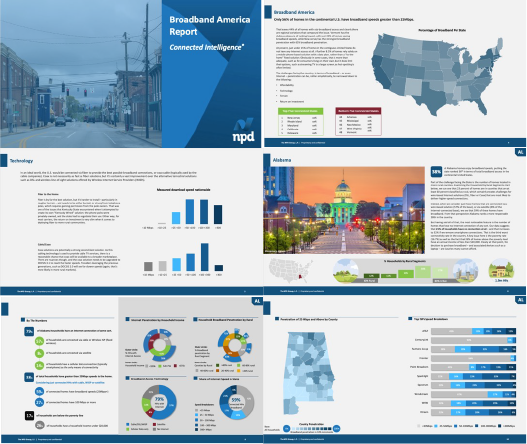 Report Two: Analysis of consumer adoption of technology and perceptions

The second report augments the initial broadband analysis. Based on survey and sales data, the report looks at consumer adoption of consumer technology in more rural markets, as well as the adoption of streaming versus physical disc sales.

Key sections of the report include:

The reports are sold as a bundled service offering at a price of $65,000