Nine years after the launch of Netflix streaming and the advent of apps from early market entrants such as HBO GO, the TV industry appears to have successfully navigated through the five stages of grief evoked by the disruptive Internet age. Indeed, 2016 is the year of acceptance and an affirmation of a transition from cable to streaming TV. Only now is it becoming permissible for industry representatives to speak publically about the co-existence of linear and streaming TV; it’s a relationship that’s likely to proliferate for the foreseeable future. 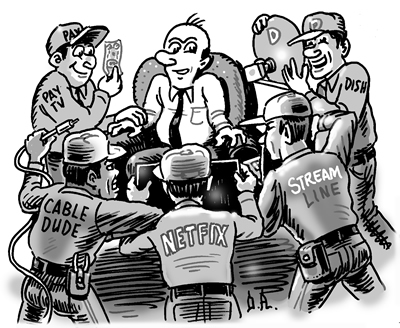 As is expected, cohorts from the traditional pay TV side of the industry continue to posture that linear TV remains dominant. NBC Universal’s chief executive, Steve Burke, recently said, “People are watching more television now than ever, and the vast majority of that television that is being watched is still broadcast and cable.” On the streaming side of the pendulum, the public messages surround projections as to when it will overtake the incumbent. During a CES keynote, YouTube’s Chief Business Officer, Robert Kyncl said, "Digital video will overtake television to become the single largest way people spend their free time before the end of this decade." While the timing is debatable, many agree we’ve entered a period of co-existence, and are heading towards a world where streaming dominates viewing habits.

As a result, hardware manufacturers are focusing on operating systems that more seamlessly integrate linear and streaming TV. This was a key theme surrounding digital video distribution at CES. Among the notable examples is Samsung’s 2016 Tizen TV operating system. With the click of one button, viewers can switch between hardware inputs as well as shows available from either pay TV or streaming services. This manner of source input integration makes access to content from a service such as Netflix just as accessible from an attached device such as Xbox as it is from Samsung’s own operating system. LG’s new Web OS platform focuses on integrating search across cable and Internet TV. Let’s say you are watching your favorite Kardishians moment - just pull up the guide and it will show you where else to find similar programming. Cable channels will show up top, and within the same menu, in yellow font, you see what’s available on Internet TV.  The content leads and the method of distribution plays a backseat role. Possibly the most intriguing blend of cable and streaming TV is DISH’s new Hopper 3, which integrates Netflix with its satellite TV channel search. This means there is no longer a need to toggle between Netflix and pay TV channels to find all seasons of the show you are watching; again content first, distribution method second. What’s unique here is a top-tier TV operator placing Netflix’s programming at equal billing with the network content they offer.

Denial, anger, bargaining, depression, acceptance; the TV industry has cycled through the emotions of grief related to the exponential growth of sometimes-competitive streaming video services. It appears, now in 2016, there is more universal acceptance of the trend; an embrace visible through the strategies of leading TV manufacturers and pay TV operators. The consumer stands to benefit from integrated programming platforms as the shows they want to watch take the lead position in search and discovery. Content owners and distributors will also benefit as it becomes easier to find and navigate their programming regardless of distribution, whether through linear TV, VOD, or streaming. The end result will be growth in viewership.