All Steps Are Equal, But Some Steps Are More Equal Than Others

For the past couple of years I’ve exercised under the theory that a step is a step is a step. And to an extent, this is obviously true. Activity trackers do a marvelous job of recognizing when my foot hits the ground and adding another step to the daily count – one down, 9,999 to go, and so on. Having said that, in the back of my mind I’ve always known that a running step should be worth more than a walking step as the heart rate is higher and I definitely “feel the burn” far more.

But apparently I was completely and utterly wrong: in reality, a step taken while running has less value than a walking step. Confused? Me too. And as we see the integration of step counters into more products, such as sneakers, it’s worth taking a closer look at the benefits of step counting overall. At a standard walking pace, 2,000 steps will take you almost exactly one mile in distance, meaning that you will need to walk roughly five miles to hit that daily goal of 10,000 steps. In reality, it’s a little less – closer to 4.5 miles, since we sometimes shuffle around our homes rather than striding purposefully forward all the time. And herein lies the issue: it’s the stride that should count the most, not the step.

When you run, you take longer strides. A single step will take you further in distance and, over time, that really adds up. So while one mile of walking equals 2,000 steps, a mile of running is only 1,400 steps. In other words, if I walk – rather than run – I can hit my step goal with less effort. Sweet 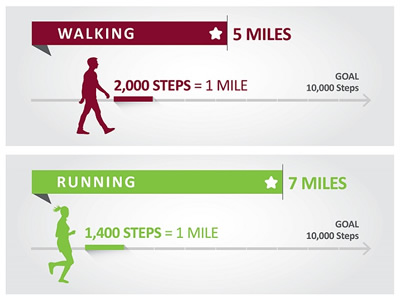 Or not really, as the whole point here is recovery

Second, as the activity tracker market continues to evolve towards a more sports-oriented consumer, the measurement tools need to change. In some ways, this goes back to the beginning, when Nike talked of “Fuel” rather than steps. The most recent variation on this theme is Mio’s PAI (Personal Activity Intelligence), which is focused on heart rate measurement more than steps. But a heart-rate dominated measurement may be a little too sports-oriented for mere mortals to get excited about. The true measurement is, I suspect, a hybrid of steps, distance and exertion. It may also need to be calculated differently for different sports (steps are not always useful after all).

Whatever the actual calculation formula is, the company that successfully merges today’s step counting with a more sports-oriented angle should be able to gain the hearts and minds of the athletic crowd that is looking to count all of their activity in a day, not just the steps taken walking to and from the gym.