Breaking Through the Rut

Rut: A habit or pattern of behavior that has become dull and unproductive but is hard to change.

The simple, three letter, somewhat crude word has a pervasive impact. I find myself in a rut each October; it’s a pattern I’ve come to identify, manage and eventually break through. Maybe it’s prompted by the end of the beach season, the back-to-school hustle, a shift from vacationing to business trips, or the shorter days. Indeed, it’s a dull and unproductive pattern that impedes productivity. However, the break through tends to be game changing. Businesses are not immune to this cycle; the TV and mobile industries fall into and, occasionally, pull out of similar doldrums. 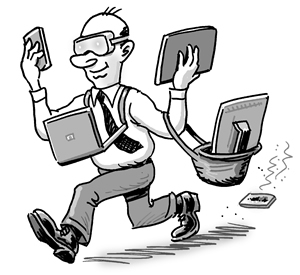 The golden age of TV is upon us with more premier programming being produced than ever before. Yet, the industry is working through what has become a stale business model. Any journalist that headlines a story with the phrase “cord cutting” captures the reader’s attention - but, the real story lies on the other side of this paradigm shift, as there are distinct strategic changes surfacing. Netflix demonstrated that subscription video on demand (SVOD) has a place in America’s living room. The establishment followed suit, resulting in a proliferation of TV network SVOD services that are untethered from the constructs of the pay TV bundle. They range from premium network offerings such as HBO NOW to genre-based channels such as Seeso that aim to capture a cult following. Networks with a strong content portfolio are not losing viewers, simply capturing them in new ways. But networks with weaker content offerings, those channels crammed into large pay TV bundles, are struggling to find their way.

It’s not just networks that are breaking through the mature pay TV market and finding new ways to re-capture and grow an audience. Cable Operators are also leveraging streaming and the proliferation of connected devices to reach a virtual audience with tailored channel bundles. DISH broke through first with Sling TV, quickly followed by PlayStation Vue; and both AT&T and Hulu have announced upcoming virtual MVPD offerings. Without the unproductive chants of cord cutting, breaking through established and lucrative but declining business models would not have been possible.

Mobile and TV are converging; only a couple of years ago mobile operators were looking at video streaming, trying to determine how to keep increased usage from congesting their networks. While the TV remains at the center of viewing habits, one cannot ignore the rapid growth in mobile video streaming. If stats interest you, check out our latest findings regarding video streaming growth here - the numbers are staggering. Accelerating trends toward mobile video usage prompted carriers to shift from capping data consumption to facilitating and monetizing consumer habits. For example, T-Mobile unleashed BingeOn, a service that eliminated data usage from the video streaming equation, and AT&T offers DIRECTV subscribers unlimited mobile data so you can stream all the NFL Sunday ticket you want. Indeed, the challenge of managing growing mobile video viewership turned into business strategies geared at leveraging those trends to facilitate subscriber growth.

I leave you with a recent quote from last week’s AT&T Industry Analyst summit (excuse me if I paraphrase slightly): “When your organization’s greatest fear is internal cannibalization, you know you’ve got something.” That’s the type of mindset that helps break through a rut.