Checking the Time, and Other Killer Smartwatch Uses

Back in December 2013, a few brave NPDers ventured out into New York City’s chilly Times Square to find out what people thought about the newly launched smartwatch. Would the men and women of New York have any interest in this new-fangled device, or was it really just the domain of the tech-evangelist? The feedback was interesting with women in particular professing a desire to buy such a device. The people we asked saw the device as a time-saver, since it would save them from pulling their phone out of their bag to check the time. Yes, it’s true; the “killer app” for the smartwatch was tracking time, itself. 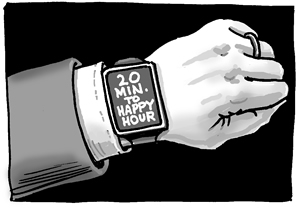 Of course, we knew such research was, at best, anecdotal and that it would take more than basic watch functions to drive the market forward. But it made for a funny story, especially as we were in Times Square with a plethora of dubious characters offering watches for couple of bucks on every street corner. Interestingly enough, to an extent, the feedback has so far proven itself to be directionally correct. While not the only function that consumers use their smartwatch for, checking time is still the most popular function; over 55 percent of users track the time on a very regular basis, compared to 41 percent tracking, for example, their steps.

Of course, the real need is about more than simply tracking the time, but rather the broader goal of tracking notifications. When we asked early smartwatch adopters about why they continued to wear the device, they would quickly confess that while they liked to talk about the cool apps, the real use case was that the watch vibrated when their phone rang, or when they got a text message. Forget reading the message; they knew something important had occurred and so they would reach for the phone to examine the event in more detail.

As the technology has improved, and the app world has expanded, so too has the range of use cases. Activity tracking has clearly become far more important, but notifications and the time remain front and center -- and these use cases have helped to evolve the customer base. Smartwatch adoption skews younger and lower income in many cases and while the natural inclination is to simply label this group as “early tech adopters,” the reality is a little different.

It appears that a successful target sector for the watch is the service industry, ranging from valets to bar staff and waiters. These are users that cannot stay glued to their phones while they are working, but still want access to “glanceable” information such as messaging notifications, alarms and (of course) how long they have left on any given shift. The ability to remain in contact without reaching for the phone is still the killer app.

This all bodes well for the newer generation of smartwatches, which can connect via cellular rather than just Bluetooth. The freedom to completely un-tether from the smartphone could become the next logical “killer use” as it means you can go for a run without carrying that ever-larger smartphone with you, for example, or range further in the restaurant without worrying about Bluetooth. Of course, cellular connections come with a fee, and success will no doubt be related to the correct balance between service fees and how important the untethering aspect of these devices proves to be.