Dining with SpongeBob and Other Parenting Tricks 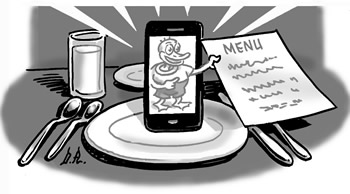 I know I can’t be the only one who’s noticed that children have become quieter and more well behaved while dining out with their parents. What used to be an ordeal, with the “under eights” raising a ruckus in public, has become much easier thanks to the smartphone and some streaming video. Prop up the phone, switch to a streaming service replete with cartoons, and then you can go back to focusing on the restaurant menu while your youngest catches up on the latest antics of SpongeBob. In many ways, this is not a new phenomenon as parents have been carrying tablets and portable DVD players around for many years. But what is different is that the smartphone is now big enough; the tablet is not necessarily needed in these mobile moments. This is not great news for tablet manufacturers, but the parents are happy, which means they’re willing to spend more money to support their kid’s video viewing habit.

Of course, kids are not the only ones watching video on mobile devices these days. According to the NPD Connected Intelligence Smartmeter, 55% percent of smartphone owners watch video at least once a month on their smartphones. This figure is highly correlated with age as younger demographics stream much more than older age groups. Close to 80% of Apple iPhone owners aged between 18 and 24, for example, stream mobile video in any given month.

While social media is still the most popular use case for smartphones, mobile video usage is on the rise -  and uses the most data in any given month; smartphone owners spend close to 40% of their data allowance on video streaming, a trend that will grow rapidly thanks to more content and larger smartphone displays that allow for a richer viewing experience. This is exactly what carriers want: as consumers watch more video, they will seek larger data buckets and pay more. Or at least this was the case until T-Mobile launched Binge On, which allows customers to stream from 24 OTT video providers including Netflix, HBO Now, Hulu, Vudu, and Sling, with no data charges (for users on a monthly data plan of 3GB/month or higher).

The carrier’s “Uncarrier” marketing theme, which began with the death of contracts followed by value-centric moves such as free music streaming, free international calls, and roaming, has boosted its popularity among U.S. customers, and Binge On will continue to drive more subscriber additions. The move, however, is quite a gamble, and there are concerns that T-Mobile could ultimately suffer from network congestion if the model succeeds too well. To counter that concern, T-Mobile has done a few clever things behind the scenes, such as data compression and limiting quality to 480p (more than enough for a phone). Further, most of the longer-form content watching is likely to occur when the user is sitting down, which often means that Wi-Fi is available too.

But more than anything, the T-Mobile offering provides peace of mind that when you absolutely need to stream video, regardless of the location, it will be there for no additional cost. And for that, parents of young children everywhere, will whisper a little thank-you every time they eat out.