Last year was one of transition for me, and not necessarily due to COVID. Rather, I joined the renting world after many years of house ownership, exchanging a 120-year-old house that was constantly in need of repair for a brand-new apartment where other people are responsible for fixing any errant issues. I don’t even shovel snow anymore, but instead sit in the warmth of my apartment, sipping coffee and ignoring the outside world while the New York winter rages on. Pure bliss: I can’t believe it took me so long to leave the homeowner game.

When we consider smart home devices, we often think of it as, primarily, a homeowner market. Homeowners, after all, have more reason to invest as it is their home for as long as they keep paying the bank. Renting a specific apartment, on the other hand, is less likely to be such a long-term game (a key attraction for me). But what I’ve discovered is that my lifestyle change has not changed my smart home addiction, but more changed the type of device that I require.

There are, in many ways, more restrictions on my smart device choices now, for sure. I cannot (or rather shouldn’t) start drilling holes in walls or changing the fundamental structure of the apartment, but the smart market has evolved in that direction anyway. So, I kept the power tools safely in their box and began adapting.

Interestingly, what I’ve discovered after an initial six months is that my smart need and engagement is at a similar level to my previous existence. Certainly, at an individual category level, the need has changed. For example, I may no longer need my own outdoor video cameras, but new categories have become more appealing.

This trend can be clearly seen in our data. While overall ownership of smart devices is lower among non-owners, the types of device that are adopted by renters is consistent, focusing on smart power and smart lighting. Interestingly, we also see Fire/CO detectors spike for renters, probably because in a shared environment you need to worry about your neighbors starting a fire, not just your own family. 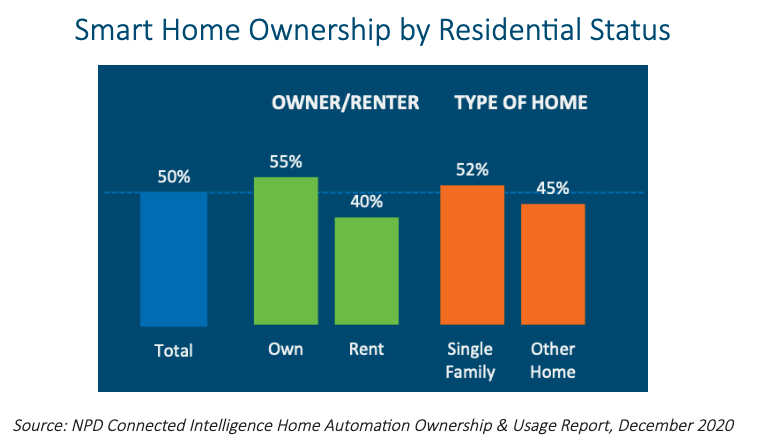 Below is the break-down of my transition by smart-type. But if you’ll excuse me now, it’s starting to snow again. So, time to make a coffee, sit back and relax, knowing that I won’t be shoveling snow anytime soon. Cheers.

My smart house had Nest thermostats hardwired in. When I first installed them, I fiddled around with the app to my heart’s content for a day or so. After that, I rarely paid any attention to them and, in hindsight, they were probably not necessary. Fast forward to an apartment and, strangely, smart thermostat controllers have become far more important to me.

The key here is that the apartment uses ductless heat/AC units with each room’s unit operating independently. I’ve added a Sensibo controller to each one which allows me to set up a heat schedule per room, all from one app, control the solution via my Google assistants (yes, multiple ones) and, most importantly, turn the units off when I leave the geofenced vicinity of my apartment, thus saving money. And it’s worth noting that unlike my previous home thermostats, which needed to be hardwired in, the apartment sensors just need to be plugged in, with line of site to the ductless unit.

If anything, I’ve doubled down on speakers, with a smart alarm clock in the bedroom (linked to the lights) and speakers in the living room. I haven’t yet embraced a smart display (apart from the alarm clock) as my iPad is my go-to when I need to look up anything. The “smart” part of the speaker set up is typically limited to the lights, quick queries, and controlling the heating/air conditioning. Yes, I know, I’m very much underusing the tech, but the speakers are still very much worth it – and part of my day-to-day life – for the controls I do need. And, of course, for listening to music.

My smart house had smart lights in multiple rooms, with the nifty high-tech bulbs replacing the more mundane ones. It’s not that I wanted to change the ambiance though color choice, but rather liked to turn them on and off via voice. The new apartment has high ceilings and bulbs that are not conducive to replacement, but I have added smart bulbs to the bedside lamps. The reason is that I connect the lights into my Google-based alarm, and they slowly increase in brightness for 30 minutes before my alarm goes off in the morning. Love that feature both for waking up… and also knowing if I wake up into complete darkness that it is not time to get up, or even consider looking at the time. So, I use fewer bulbs than in the house, but the ones in use are equally as important.

I do miss smart lights in the living room but getting up to press the light switch gets me a few steps closer to my fitness goal I suppose. Life is, apparently, about balance and compromise.

Video monitoring was a key component of my smart house, but with the caveat that all the cameras were outside, primarily focused on the front door area and the back, where the cars were parked. But in my apartment, I have little need to track the outside: packages are delivered to a mail room, so I know they are safe, and the complex is wired up with cameras galore. As a result, my cameras are sitting on a shelf, and I’m not paying for the monthly video storage fee.

I say seasonal, because I bought into the Google marketing a few years ago: I use smart power to turn on my holiday lights during the Christmas period, rather than crawling under the tree. But apart from that I do not find a major need for smart power adapters as I’ve used smart lighting to address most issues.

Smart locks (No use)

I’ve had a love/hate relationship with smart locks ever since the batteries in one froze and left me locked out of my home. But the convenience of the smart lock – especially with three kids who constantly forgot their keys – meant that I persevered with the technology.

With an apartment, I don’t have the option to install my own smart lock, but the door uses an electronic “key fob” concept similar to a hotel. Perhaps at some point that solution will include an app so I can use my phone to open the door.