Last week the FCC announced that it plans to boost rural broadband speeds through a proposal to modify the Alternative Connect America Cost Model (A-CAM) program. The aim of the changes is to redefine the broadband speeds necessary to gain A-CAM support, up from the current 25/3 Mbps to 100/20 Mbps. If only it was that simple.

While the intent is, one would hope, for the right reasons, increasing the minimum speeds may actually slow down deployment of broadband into rural parts of the US as it means some technologies – such as higher speed satellite and 5G to the Home – may no longer qualify for funding.

In fairness to the FCC, the proposed changes simply bring the A-CAM program into line with the broadband speeds specified in the Infrastructure Investment and Jobs Act (the $1.2 trillion Bipartisan Infrastructure Law). As such, the proposal can be seen as an attempt to simplify the confusing array of criteria and options. Further, it is certainly true that the previous goal of 25/3 Mbps is starting to look dated: more populous areas of America are typically served with up to gigabit per second broadband.

But while the intent may be for the right reasons, the reality is that the proposed FCC change (and the rules in the Infrastructure Act) are potentially limiting deployment options. Deploying cable-based solutions to highly rural areas is expensive and slow to deploy. As such, it would make sense to offer funding on a sliding scale, perhaps, with faster broadband options (better for the consumer once they arrive, but more expensive to roll-out) benefit from higher levels of funding, while relatively slow (but still broadband) options that are faster to deploy get lower levels of funding. 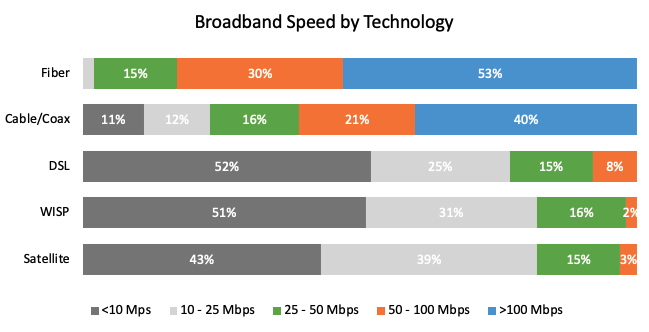 When we consider the Internet options that are available, the only two options that are clearly in the ballpark of the proposed 100/20 Mbps are fiber and cable/coax. Based on the Connected Intelligence Broadband America State Report, which sourced millions of speed tests, we can see that DSL, Wireless ISP and Satellite all struggle to achieve more than 100 Mbps speeds. And that leaves 5G to the home which is, well, complicated, as it depends on factors such as the population served by the cell tower, the back haul capacity and, most importantly, the frequency of spectrum used for the 5G solution. While 5G is often cited as offering 500Mbps or greater potential, the reality is that most, if not all, rural 5G deployments will use mid-band (or low-band) spectrum that is unlikely to surpass 100 Mbps when you consider all of these factors.

Does that speed limitation matter? Not really. If I was currently limited to a DSL option at sub-broadband speeds of under 10 Mbps (our research shows that 52% of DSL to the home is under 10) then I would welcome a 5G solution (or any other technology) at 25 Mbps, never mind higher. I fact, I’d probably pop online and zoom some friends and family to tell them the good news… without suffering buffering and lag for the first time.