In the days when mobile phones did not all look the same, they were considered the eye candy of the business. People chose a phone as much (if not more) for its looks and the statement that it made about the user as they did for its technology. And while the mobile phone market has slid into the banality of rectangular blocks of blah, the wrist-worn wearable has taken on the mantle.

I will admit, I’m not immune to this trend, although for me it is less about a fashion statement and more about the person I want to be. I wear a high-end Garmin Forerunner, which is not really a true smartwatch. But what it lacks in smart functionality, it makes up for in its message. It screams, “this guy is sporty, he could probably run a marathon before lunch.” Which isn’t true, of course, before lunch I’d rather have a coffee … and then perhaps a nap. But few people get to discover the reality; the perception that my watch suggests is one of sportiness.

At the same time that style remains a key purchase decision, the innards of most smartwatches and trackers are becoming remarkably similar. Pretty much all of them can handle your exercise needs, including heart rate monitoring, GPS for your outside jaunts, and an array of other similar features. Attempts by many OEMs to differentiate by pushing the boundary of what the watch can monitor – such as blood pressure, EKG, and so forth – appear to appeal less and less to the mainstream wearer, which means we are entering a scenario of diminishing return for all the new technology that is crammed into the device. 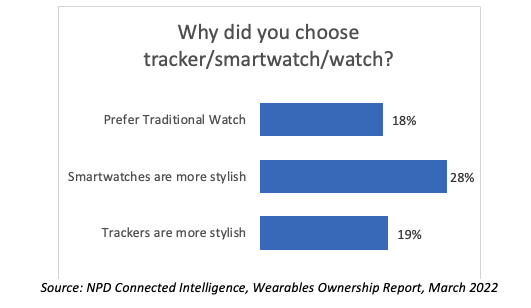 This takes us back to the comparison to phones, back in the pre-rectangular days. If style, and the statement that the watch makes about you, is so important, then being able to see, touch, and even try on, the watch prior to the purchase is very important. There’s a reason why the phone market was one of the last bastions of resistance to the online sales trend: people wanted to see and hold the device first. The same is true for smartwatches and trackers, at least for the initial purchase.

Now, there’s a key difference between the watch purchase and the old days of pre-pubescent phones: the watch is not a device purchased in isolation. It, obviously, has to work in harmony with your phone and the rest of your technology-driven ecosystem. That means that the customer is far more likely to buy a watch from the same brand as their smartphone (particularly for the big two smartphone OEMs). But even there, it’s not a sure thing: 25% of iPhone customers who buy a watch purchase a smartwatch outside of Apple’s ecosystem, for example, according to the Connected Intelligence Wearables Ownership Report (March 2022).

Of course, once the first smartwatch is purchased, and assuming the consumer fully commits to that brand, the in-store experience becomes less important. Just like buying your smartphone upgrade, if you know you want the latest iteration of the watch you currently have, then the need to jog to the nearest store is replaced by a quick online upgrade from your couch (no need to count any steps there). But if there is even a sliver of doubt that perhaps there’s a better choice (we’re looking at you, Android consumers) then the sanctity of the store display remains key to success in the smartwatch (and activity tracker) markets.