I gave my daughter, Charlotte, her first phone when she was just five years old. It was hardly an appropriate age, but what’s the point of having kids if you cannot use them in the occasional social experiment. And besides, it was a cool little phone - a Firefly - that had mom and dad call buttons.  The phone gave us peace of mind when Charlotte was on play dates, but she very rarely hit the call button.

Several phones later (she requested a “real phone” quickly), Charlotte’s mobile life finally took off in fifth grade when all of her friends started getting phones, too. Suddenly, her world became a lot more private, leaving us - and our fellow parents - muttering about the similarities between Pandora’s box and mobile phones. And there was an obvious lesson for me: my kids don’t need a phone to call home, or perhaps don’t want to call home; ouch!

The choice of a Firefly phone ages me (and my daughter, who is now in college), and I’ve lost count of how many phones she has gone through by this point. But it appears that apart from some serious advances in phone technology in the past 12 years, the age-appropriateness remains quite similar. Indeed, in many respects, advances in technology may be a limiting factor: I recall the Firefly phone costing less than $100; but today, everyone needs a smartphone, which means shelling out $500 or more to connect your children.

At what age give your child their first phone? 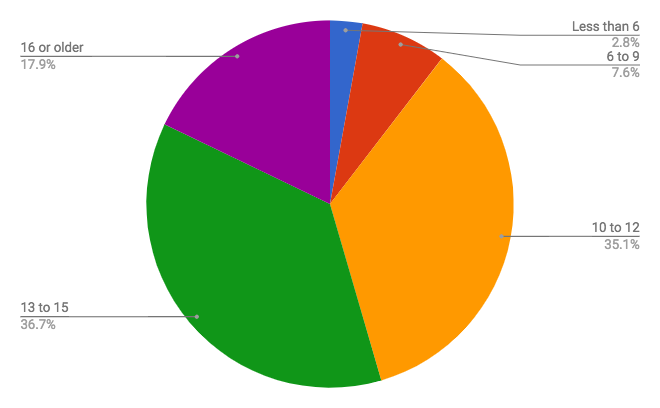 Source: Civic Science, February 2018. Base: 633 parents who have children

So while roughly 11 percent of parents hand out a phone to the under tens, the biggest adoption bump remains between the ages of 9 and 11, exactly when Charlotte’s friend all started to get their first phones 12 years ago. And this makes sense as it is when our little babies have to grow up a bit, moving from relatively small elementary schools up to the “big league” of middle school. It’s a daunting time for the kids, and downright terrifying for many parents if it is the first child to make the leap.

It is also the point when kids need a phone as so much more of their day-to-day school life revolves around technology, from Google Classroom to Chromebooks. And when it turns out that there are too few Chromebooks for the number of kids in the class, being able to whip out your phone is essential.

So there are a few lessons here for phone OEMs and carriers. From a carrier perspective, marketing to parents of fifth graders is a strong move. The timing is a little tricky as it is too late to wait for the “back to school” period as these kids migrate to middle school, and targeting too soon, as part of the fourth to fifth year move seems premature. Which makes me think that we are in the appropriate time now, somewhere around the middle of the school year.

For the handset manufacturers, there is perhaps an opportunity to build products that are more relevant for the younger kids. There have been several attempts at this market over the years, ranging from the Firefly to wearables, but none of them have really hit the mark as being “sophisticated” yet durable and small. In many ways, I think I’m describing a good old flip phone, but one that has been dragged into the twenty-first century so that the kids still consider it a “real” phone. We’ll be scouring Mobile World Congress next week to see if we can find any good examples.