Heady Days for T-Mobile’s Data Use

But it’s not just the number of subscribers that demonstrate T-Mobile’s growing strength. While new subs are obviously a key metric – and one that many in the industry place almost too much emphasis – a more important way to quantify success is how the subscribers use the new service. Gaining a lot of low-end, limited use consumers would be a good start, but one fraught with longer-term churn issues.

This doesn’t appear to be the case with T-Mobile. Looking at the carrier’s base of smartphone users, the increases in cellular data use has been quite astonishing over the past six months. On average, a smartphone consumer uses less than 1.5 GB of cellular data in a given month. Obviously there are ranges within this top level number, and all carriers have a smaller set of consumers that use far more. But it’s a good ballpark to start with. By comparison, in November, T-Mobile consumers averaged just under 2.75GB of cellular data, almost twice the typical average, according to the Connected Intelligence Data Consumption Report. 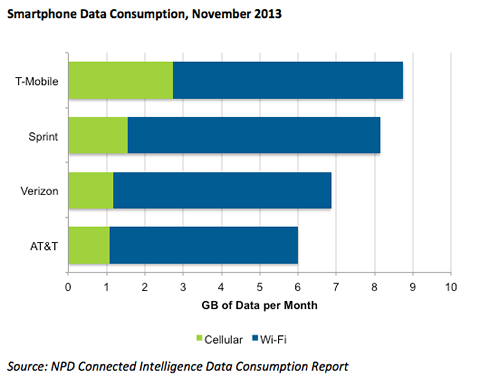 And this is not a one-time fluke; the T-Mobile base has been increasingly active with its cellular data use since June 2013. Month after month, average cellular data use has increased from 1.25GB per month to the current high

Clearly, this provides a “sticky”, or loyal customer, as moving to another carrier would result in a major hike in data fees under the current pricing schemes. Of course, there is also a concern that comes along with such success: will T-Mobile need to invest more heavily in its network in order to sustain such data rates? The U.S. mobile market abounds with examples where a carrier’s success comes to a rather abrupt halt as network capacity hits the proverbial brick wall. AT&T discovered this in the early, heady days of iPhone adoption. Verizon Wireless has seen some issues caused by a significant increase in video consumption in some key markets too.

The answer may depend on how far the data consumption grows. This is new territory for cellular data use. And to an extent, it will depend on how successful T-Mobile is with its Uncarrier tablet solution that could drive broader adoption of cellular-based tablets. Either way, we will be watching the growth with interest.