It’s September and the pennant race is heating up here in NY. At the time of writing, the Yankees are just one-and-a-half games out of first place, and the Mets hold a commanding lead in the NL East. Over the coming weeks, more viewers will tune in to the game, and October headlines will be all about the playoffs. Meanwhile, TV industry news has been concentrated on cord cutting; as expected Q2 ’15 turned out to be the inflection point where the first sizable number of subscribers canceled their TV service. Playing off the trend toward streaming video, Apple’s annual keynote included an Apple TV app demonstration from MLB.tv.  Any fan watching immediately recognized what it means for the future of the game. 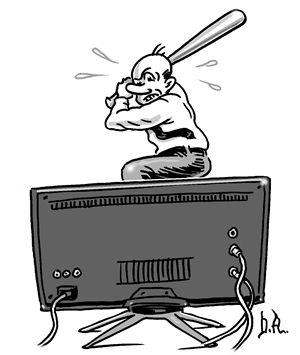 Features such as split screen two-game viewing, and interactive on-screen scores are perfect for playoff baseball games. Put the tablet away and set down your smartphone because all the action you need is on the big screen. MLB has been at the forefront of the transition to streaming video, launching MLB.tv back in 2002, and more recently building the infrastructure behind the WWE Network and HBO NOW. We should expect more to come as their tech arm is working with other leagues such as the PGA and NHL. The key to the new Apple TV is an immersive user experience. There are streaming media devices with more content, but Apple is pitching the future of TV apps, and that pitch surrounds the dream of immersive viewing.

The new Apple TV and app from MLB continues to lack only one seemingly simple facet: none of us here in NY will be able to use it to watch the playoffs, as in-market games remains blacked out. It’s not as though the “industry” wants it this way. In fact, MLB, the sporting clubs, and networks are working to solve this challenge. TV Everywhere efforts are plagued by legacy contracts, exclusive rights, and lucrative deals that keep this whole machine alive. But, as viewers migrate to streaming, cord cutters and cable subscribers alike, it elevates the importance of resolving this challenge. Blackout restrictions have been easing, yet programming options remain limited, complicated, and available to only a select few fans. When broad based in-market live streaming coverage opens up, companies such as Apple will immediately see significant spikes in hardware sales and device usage. Only then will the immersive TV experience truly become the way we all watch the game.