There’s a flaw with streaming video that smacks me in the face every now and then. Just when I’m settling into the show of choice, I occasionally get an ugly little message that says “Loading, please wait.” I don’t like it. It reminds me that my TV viewing habits are based on a less-than-perfect infrastructure (the Internet) with varying bandwidth to the home and potential server issues along the way. More importantly, it ruins my enjoyment of the show in question. 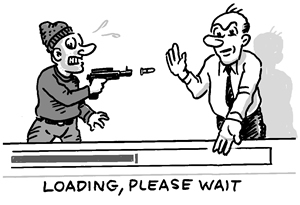 It doesn’t really matter where the flaw du jour is: is it the TV network’s servers that cannot cope with tonight’s demand, or that my broadband provider is choking? The net result is that my TV show has stalled and I sit there watching the little blue bar slowly inching forward until the show can kick in again. What is worse, is when this happens in the middle of an episode, rather than at the beginning. If the delay happened at the start, perhaps I wouldn’t mind quite so much. I could fix my drink, and get a snack while the show sorted itself out. No, no, that would be too easy; rather, the delays occur in the middle of the show, and once they begin I know that I’m going to continue to see the little blue bar that can’t. Last night I was 30 minutes into an episode: dead bodies were strewn across the landscape, but the killer, or killers, were yet to be revealed. A digital-delay cliffhanger had been thrust upon me, unwanted and unplanned for.

I had to give up. There comes a point when there’s one too many delays, and you realize that the show is no longer enjoyable. I switched shows – same app, same broadband – and everything else worked just fine, which was great, but it didn’t answer the many questions swilling around in my head about the show I really wanted to watch.

Lack of reliability is the biggest threat to the ongoing growth of streaming content: early adopters were okay with delays, but we have clearly moved well beyond the early adopter phase. “Real” TV doesn’t suffer from buffering issues and streaming services have to become just as reliable if they are to maintain a strong presence with the consumer base. If I could have watched my show on cable TV last night, it would have been a seamless experience, and I would now know the full detail of who did what, to whom and why. I’ll have to try again tonight and hope that the story unfolds without the jitters and stammers of a struggling Web service.