“If I share the internet with our patrons, the internet is so slow that the connected ATM stops working.” So said the owner of a small café in Davis, West Virginia, three years ago when I was touring the rural U.S. looking to understand the reality of broadband in America. And boy, that was some reality. But there was hope: the promise of a fiber broadband solution due to roll down the main street of Davis, lighting up the town with new opportunities.

Three years and a pandemic later, I revisited Davis a few weeks ago to see what had changed as part of NPD’s next wave of Broadband America research. And the answer was, sadly, not much. The fiber connection deployment had stalled, stopping just a few hundred feet away from the café with terminated loops of fiber hanging tantalizingly from the telephone poles. As a result, the internet remained just a trickle of bits and bytes and the ATM obligingly spewed out cash with no shared Wi-Fi for the patrons. The locals were philosophical: maybe in another three years they would have an actual broadband connection. Welcome to the reality of rural America.

But apparently, reality is in the eye of the beholder. According to the FCC’s new, improved maps, the café in question has not one, but two broadband options available to it. The first is the fiber connection that doesn’t quite make it to the café. Perhaps I can give that carrier a pass; after all, a few hours of extra work and the connection could be strung far enough for the patrons to enjoy the fiber speeds. But the second connection? Well, that is fantasyland.

The supposed broadband connection is the very one that the café has right now. It’s a DSL connection that, according to the new maps, supports 45 Mbps download speeds. That’s well into the realm of true broadband, if it were accurate. But it’s not. It’s nowhere near the truth in fact. And herein lies the challenge of the new maps: while the FCC has tightened up the rules of what a carrier can claim as a served location, they appear to be able to provide theoretical download speeds as the connection rate, rather than the true speed that a location gets.

In many cases, the theory is fine: throw down a fiber connection and you can expect a few hundred megabits per second with no problem at all; same too with a coax cable solution. But DSL? That is dependent on so many factors, such as the distance from the last repeater, the quality of the phone cabling (which is often not so great in more rural areas), and more. Hence the great divide between the published theory of 45 Mbps and the reality of a data trickle. 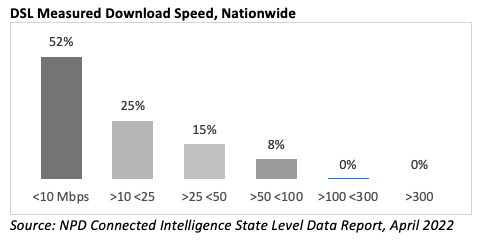 For the FCC, there’s a fairly easy fix for its maps. The government body needs to stop believing the hype of the carriers and should take into consideration the reality of speed tests. If anything, they should err on the side of caution and simply not consider DSL to be a broadband solution. Fiber, cable, and fixed wireless access (in most cases) will provide broadband to the home; DSL provides a stopgap, better-than-dial-up solution. After all, the technology was the internet of choice for most non-rural homes in the 1990s. Is it really fair to consider a 30-year-old technology an adequate solution to check the broadband box? I think not.