The Smartwatch Boom is Here

For a product that was criticized by many only a short time ago, the smartwatch has regained momentum in the U.S. market. Indeed, far from being a failed product, we expect U.S. smartwatch ownership to surpass that of the cheaper and more ubiquitous activity tracker by the end of 2020. This is despite the fact that smartwatch owners paid an average price of nearly 2.5 times that of activity tracker buyers (according to the NPD Connected Intelligence Wearables Industry Overview and Forecast, Dec. 2017). The growth is being driven by the Apple Watch, but it’s a success that will have a ripple effect on smartwatch brands that meet the consumer need in the Android market as well.

At the beginning of 2017, activity tracker ownership among U.S. adults stood at over 43 million devices – well over double the number of smartwatch owners. This made sense, given the wide price differences between the categories, better battery life for trackers, and the growing pains that plagued the smartwatch space prior to the last year. Additionally, many older smartwatches were generally considered to be too bulky to be a true replacement for the activity tracker. What once drew consumers to activity trackers, their simplicity, has been working against the category most recently. Consumers are now looking for more sophisticated use cases with features such as intelligent health and fitness tracking, as well as easy-to-use notifications and messaging. Many are also looking to use wearables as a control hub for things like music and home automation. As a result, many existing activity tracker owners and new buyers are making the smartwatch shift.

This process has been accelerated by the latest launch of the Apple Watch Series 3 with built-in cellular connectivity, and lower pricing on the older Watch Series 1 and 2. In fact, by the end of 2017, NPD projects that Apple will have sold almost 17 million Apple Watches in the U.S. since the devices original launch in April 2015. In addition, the mix of activity trackers will shift, as the smartwatch commands a larger percentage of the market. For example, as higher-end activity tracker buyers move further up-market to the smartwatch, much cheaper and more basic activity trackers will take over an increasing percentage of new sales.

To gain a clearer understanding of the changing dynamic between the smartwatch and activity tracker, NPD produces a bi-annual ownership forecast of the market. Based on that forecast, the below chart is of view of the shifting ownership splits among U.S. adults over time and projected forward. 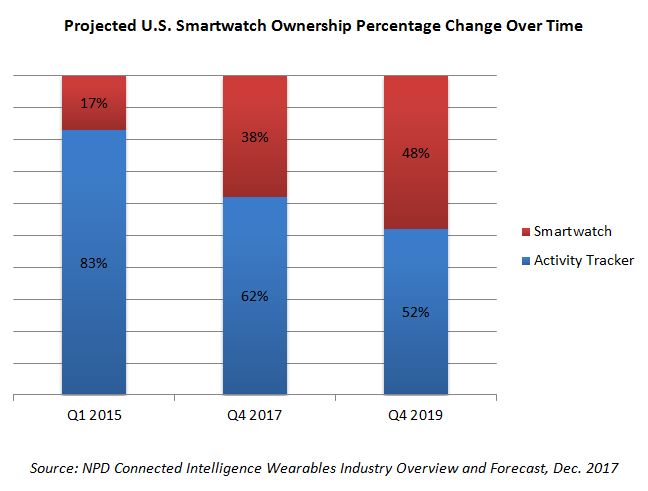