There is an art to losing, or not gaining as quickly as previously expected. A story can always be shaped, even in the face of reality, that allows a company to lose gracefully in the hope that any dip in fortunes can be stemmed with a shift in fortunes. We are seeing this in the broadband market as differing key performance indicators are being used to show the best possible version of reality.

First, we should note that there is a fundamental difference between “broadband” and “internet”. These are not interchangeable terms, and this is important when considering how we measure the digital divide. But the terms are often used somewhat interchangeably, such as the FCC’s plan to offer “Broadband nutrition labels” that apply to services of all speeds.

And while there have been efforts to grow broadband access, such as the passing of the Bipartisan Infrastructure Law, success is being measured by “internet subscriptions” with results ranging from the reasonable (15% of people in New Hampshire and Washington state do not have internet) to the depressing (39% of Mississippi residents missing internet). It gets worse when we remember this is “internet” not broadband access, which is what the infrastructure bill is working to be support.

Once we ignore the sub-25 Mbps households, the data is depressingly worse still. Take the New Hampshire figure above, for example: while the White House reports 15% of homes have no internet, the Connected Intelligence Broadband America report highlights that 52% of households have less than 25 Mbps download speeds. More than half. And as for Mississippi, where not even the bland internet terms can make matters look good… only 28% of households have broadband (NPD’s Broadband America report provides full, county-level details across the U.S.). 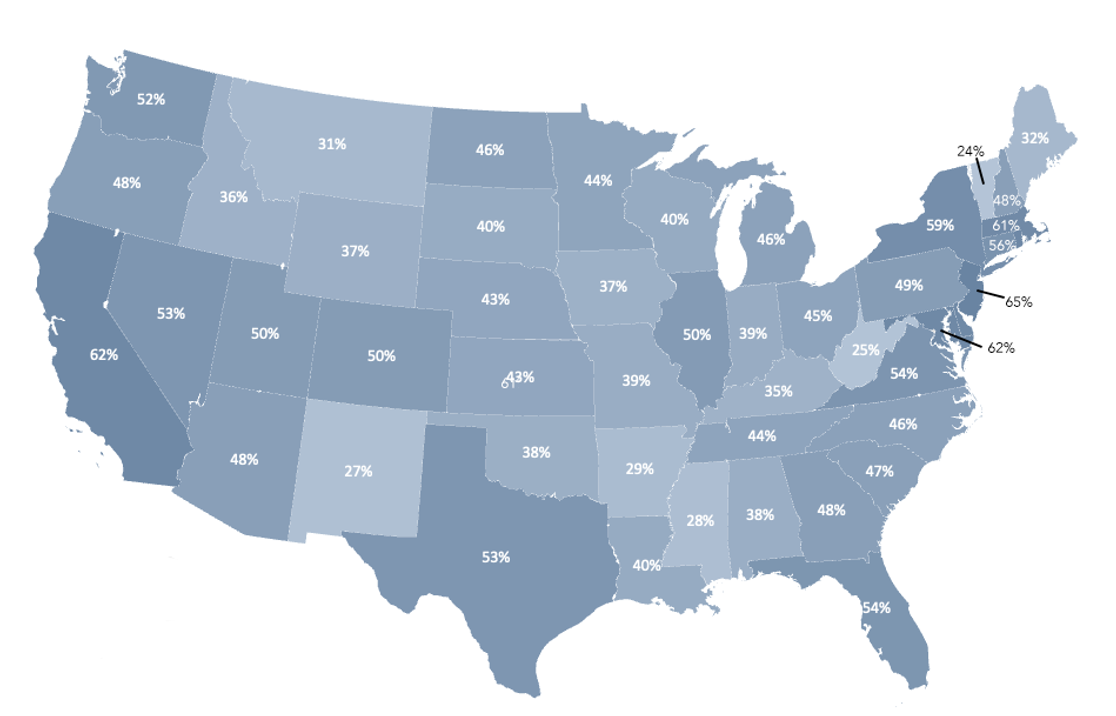 Over 12 million households in the continental U.S. have reportedly taken advantage of the Affordable Connectivity Program. That equates to 26% of homes that are estimated to be eligible. And while that is obviously a great step forward, there are still 74% of eligible homes not connecting. We believe part of the reason is the change from the previous Emergency Broadband Benefit, which was available to a smaller segment of the market but offered a higher discount of $50 per month, to the new Program which provides a $30 discount. That may not seem significant in the grand scheme of things, but an additional $20 per month, in addition to a significantly rising cost of living, can make broadband a “nice to have” rather than must have. Indeed, Spectrum, in its Q2 results, cited the disconnection of 59,000 homes that had been on the Affordable Program previously. That is believable: consumers that were on the previous Emergency Broadband Benefit saw a price increase in March.

Spectrum was quick to say that these disconnections were consumers reverting to a smartphone-based solution, which helps support the impact of the Affordable Connectivity Program changes. But again, we suspect that there is a definition challenge in this interpretation that bodes well for the broadband market overall, but less so for the incumbent internet providers. We do believe that some homes will have dropped their fixed broadband solution – particularly as the cost of living has increased putting additional pressure on lower-income homes – but it is far from the full story. Instead, it is possible that many homes have dropped their incumbent provider for an alternative broadband solution from a carrier better known for offering smartphone-based solutions.

And that is hardly a nuance of the facts. Verizon and T-Mobile are having a significant competitive impact on the broadband market with their fixed wireless access (5G to the Home) solutions. According to public reports, Verizon enjoyed consumer-based fixed wireless access net adds of 168,000 while T-Mobile saw an increase of 560,000 net adds, bringing its FWA base to nearly 1.5 million (a mix of business and consumer accounts, but we anticipate that the majority are consumer). And T-Mobile was quick to point out that more than half of its new net adds were households previously using cable-based broadband.

And perhaps this is the good news after all of the spin. Regardless of which carriers win or lose, we do expect the number of connected (ahem, broadband) homes to increase over time. And fixed wireless access will, at least in the short term, be the winner as there is virtually no additional CAPEX to expand the footprint (at least assuming that 5G is installed on the towers).