Stream me up, Scotty! 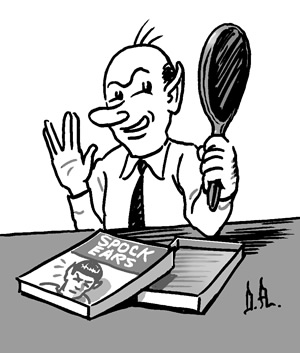 On the spectrum of Star Trek fanship, I fall somewhere between devout moviegoer & re-run viewer, and fully costumed Trekkie conventioneer. Some of my most vivid childhood memories are rushing home after school to see which new planet the Enterprise’s landing party would beam down to, and what alien species Captain Kirk and the crew would encounter. The original series struck the right chord at the right time, as manned space travel was capturing the imagination of TV viewers around the world. Fifty years after the first stardate, it’s only fitting that Star Trek marks its golden anniversary by breaking out of the box again, with new episodes slated to premier on CBS All Access streaming service instead of broadcast TV.

There is little doubt that the legions of Star Trek fans will find the new content. The series is perfectly timed to draft off of 2016’s feature film Star Trek Beyond, and its tech-savvy fan base was among the first to embrace SVOD as a video pipeline (source: NPD’s VideoWatch). Trekkies’ loyalty is a safe bet, and the fact that the series won’t air on mass media adds to its cool factor. CBS’s challenge will be to keeping rabid fans away from hacking unauthorized footage before it’s released. It’s a good problem to have, and the new show is sure to make All Access a top-tier viewing destination.

Chat rooms, fan pages and social media have already started buzzing, but will viewers pay the $6/month? High costs to produce special effects will require a steady stream of subscribers to make the series financially viable. CBS would need to discourage free-trial churners who binge-and-bail, and instead release episodes one at a time. Production timing for an hour-long sci-fi episode makes it unlikely that Season 1 would drop all at once anyway, as did Netflix’s House of Cards and Amazon Prime’s Transparent. It’s a long-term play to build loyalty, not just for the new series but for CBS overall.

All Access is banking on Star Trek to pull in new subscribers, encouraging them to add another service to their mix. One-in-three SVOD users already have multiple subscriptions, and it reflects a growing percentage of viewers (source: NPD’s Entertainment Trends in America). Although All Access is a pipeline for all types of CBS content, it isn’t hard to imagine a SVOD service dedicated to sci-fi programming.  Other genre-specific offerings for comedy and family content are already in the works, and will give consumers even more viewing options.

Ultimately, CBS’s Star Trek/All Access announcement reflects good corporate vision and well-planned synergy where viewers win too. Hailing frequencies are open for lifelong Trekkies like me, waiting to go where no one has gone before.  SVOD and prosper!