What’s Up Apple’s Sleeve This September?

For those of us living in the northern hemisphere, the beginning of September marks the end of the summer with colder weather ahead. But if you are one of the 900 million iPhone owners, and especially if it’s time to replace your current device, September also marks the grand unveiling of Apple’s latest and greatest in the iPhone series and more.

Recently, Apple has been feeling pressure from the financial community regarding declines in iPhone revenues, as consumers are holding on to their smartphones for much longer than in the past. Rises in average selling prices (ASPs), extended longevity of new generation devices, and lack of innovative features beyond imaging enhancements, are just a few factors reducing consumer motivation to upgrade. But while all of that may be true, Apple has an impressive retention rate of over 90% for its iPhone business1; meaning that more than 90% of Apple iPhone customers simply upgrade to another iPhone model when it’s time to replace their smartphone. The stickiness of the iOS ecosystem is a gold mine as it has allowed Apple to boost service and add-on product (i.e. Apple Watch and AirPod) revenues, and to an extent offset the revenue declines observed on the smartphone side of the business.

More good news for Apple is the consumer’s receptiveness to increasing smartphone ASPs. A hero smartphone today costs anywhere from $1,000- $1,500, and trade-in incentives offered by OEMs, coupled with carriers’ aggressive financing programs (so called Equipment Installment Plans) that allow consumers to pay for these phones in up to 36-month installments, have aided consumer adoption. According to the latest NPD Connected Intelligence Mobility survey, almost three quarters (72%) of Apple iPhone users have stated that they will be somewhat, very, or extremely likely to purchase a hero smartphone like the iPhone XS or XS Max when it’s time to replace their devices.

Apple has many times been able to persuade consumers to upgrade to better technology regardless of price, and if the rumors for the new iPhone series are accurate, history will likely repeat itself. According to unverified reports, Apple is planning to introduce three new iPhone models; an upgrade to the “budget” XR (price: $750- $900 depending on storage capacity), an upgrade to the mainstream iPhone XS (price: $1,000- $1,350) and a new version of the flagship XS Max (price: $1,100- $1,450).

It’s almost a no-brainer that the new series will be dubbed the iPhone 11, but the big rumor is what Apple is planning with the branding of the flagship Max model as the new phone will allegedly be called the iPhone 11 Pro. Apple uses the “Pro” designation for its top-of-the-line device as it has done with iPad Pro and MacBook Pro variants, and this branding (supported by superior technology features) has historically been quite a cash-cow for Apple.

The iPad Pro has been successful because it offers tangible benefits over the regular iPad lineup. Should Apple launch a “Pro” version of the iPhone 11 series, it needs to ensure that the phone’s superiority goes beyond the large display, which has been the only distinctive factor between the regular and Plus/Max versions of the previous iPhone series. Fortunately, almost two thirds of new iPhone XS series buyers have already paid the $100 premium for the larger screen version, the XS Max. Regardless of whether Apple brands the new flagship as the iPhone 11 Pro or not, the large screen version will likely garner more attention. And if it’s branded as Pro, we may see other hardware enhancements (such as an extra camera lens or wireless charge sharing feature) over the regular iPhone 11 version, as well as a slightly wider price gap. 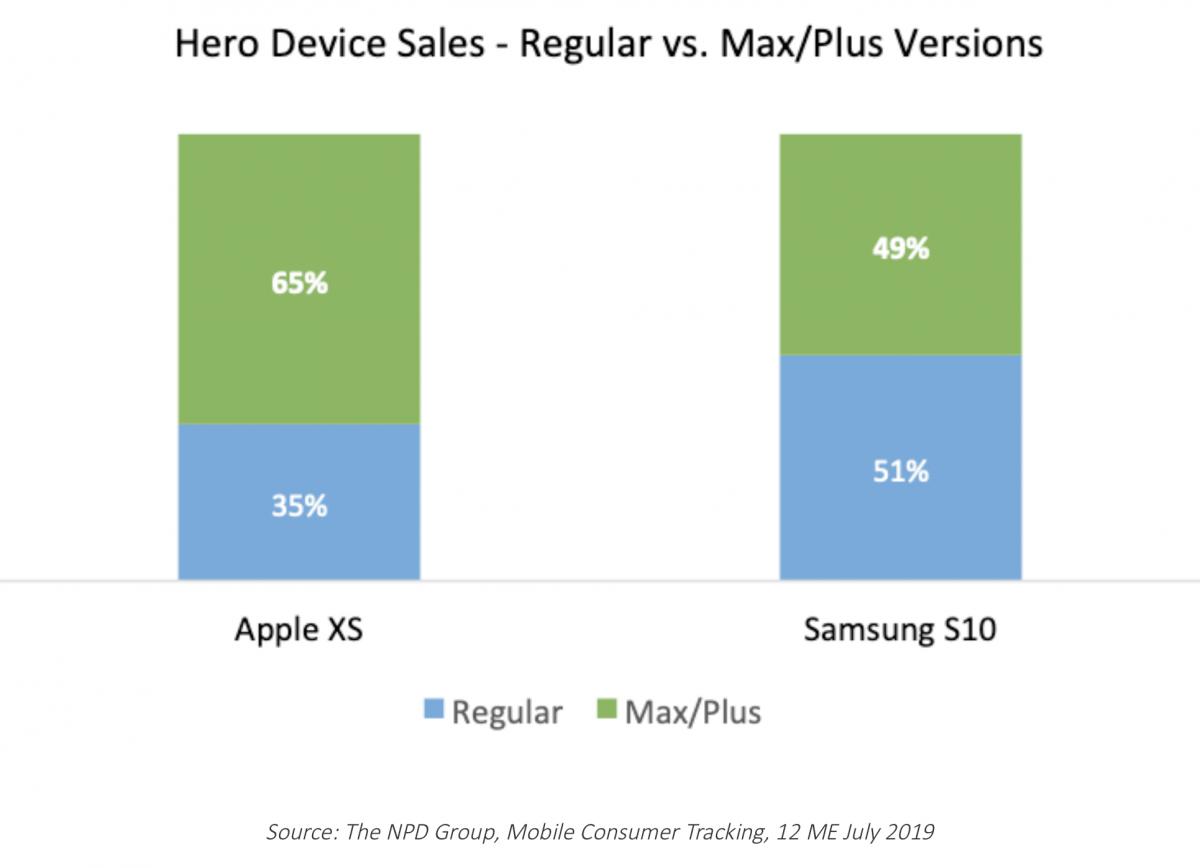 Incidentally, with 5G being such a hot topic in the mobile landscape, one might be wondering where Apple stands with 5G and the possibility of the new iPhone 11 series boasting support for the superfast networks. In short, the possibility of Apple launching a 5G iPhone next week is as slim as the OEM unveiling a version with a foldable display. 5G network deployments in the U.S. are currently limited to small zones in a handful of metropolitan areas, and more importantly there are almost no real use cases beyond the ability to download large data files or enhanced real-time gaming that would motivate consumers to pay a premium for a 5G device and/or service. Apple implemented the same strategy when it introduced the first iPhone without 3G support and waited for carriers to blanket the nation with 3G service. Considering the current sales performance of the handful of 5G smartphones (which NPD estimates to be around 100,000 activations since the debut of commercial 5G networks in late April), waiting on the sidelines until next September seems to be the right strategy for Apple.