52 Percent of Millennial Smartphone Owners Use their Device for Video Calling, According to The NPD Group

Port Washington, NY, March 29, 2016 –As consumer preferences and habits for smartphone usage continue to shift, Millennials are driving the increased usage of video calling as a preferred application among smartphone users. In fact, according to The NPD Group’s Connected Intelligence Application and Convergence Report, more than half (52%) of smartphone users age 18-34 say they now use their smartphones to conduct video calls, representing an increase of 10 points year-over-year. 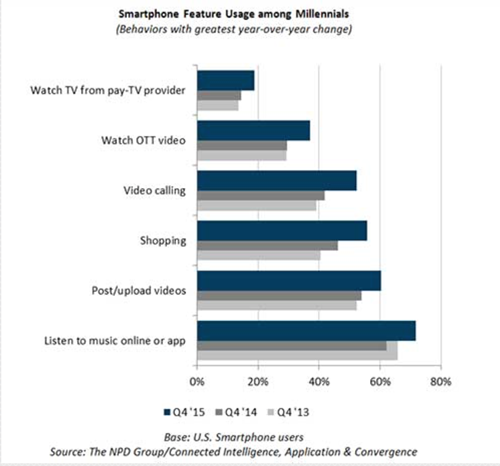 In addition to video calling, smartphone users in the 18-34 age range also cited using their device for music and shopping as well as posting and viewing videos. In fact, many of these behaviors increased in prevalence among this user segment during the prior year, too.

The NPD Group’s Connected Intelligence Application and Convergence Report analyzes consumers’ use of the connected TV, tablet, and smartphone; examining which content resonates on which device and how these devices are drawing consumers away from their computers. The report covers use of devices that deliver content over the Internet via fixed or cellular networks, tracking usage of services such as Netflix, Facebook, and Pandora across connected TVs, video game consoles, Blu-ray Disc players, streaming media players, tablets, smartphones and computers.

NPD Connected Intelligence’s Application and Convergence research surveyed more than 5,000 U.S. consumers age 18 and older from diverse regions and demographical backgrounds. These consumers reported their usage of desktops/laptops, connected TVs, tablets, and smartphones. This survey was fielded in late October 2015. Trend is in reference to the Q4 2014 or Q4 2013 study fielded during the same time those years.