Internet Connected Devices Surpass Half a Billion in U.S. Homes, According to The NPD Group

PORT WASHINGTON, NEW YORK, MARCH 18, 2013 – There are now more than half a billion devices in U.S. homes that are connected to the Internet and deliver apps, according to new findings from the Connected Intelligence Connected Home Report from global information company The NPD Group.  Increases in tablet and smartphone penetration drove the U.S. market to this milestone.

Overall, the number of connected devices per U.S. Internet household has grown to 5.7, up from 5.3 devices three months ago. In that time frame, the installed base of tablets increased by nearly 18 million and there are nearly 9 million more smartphones users.  Amongst this growth, Apple and Samsung remained the most prevalent smartphone brands consumers own, and Apple continues to dominate the tablet market.

“Even with this extraordinary growth in the smartphone and tablet market, PCs are still the most prevalent connected device in U.S. Internet households, and this is a fact that won’t be changing any time soon,” said John Buffone, director, devices, NPD Connected Intelligence.  “However, when you look at the combined number of smartphones and tablets consumers own, for the first time ever it exceeded the installed base of computers.”

PC penetration among U.S. Internet connected households is nearly ubiquitous at 93 percent, but virtually unchanged over a three month period. Smartphones and tablets, however, increased their penetration.  Smartphone penetration rose from 52 percent to 57 percent of cell phone users while tablet penetration increased significantly from 35 to 53 percent of Internet households. 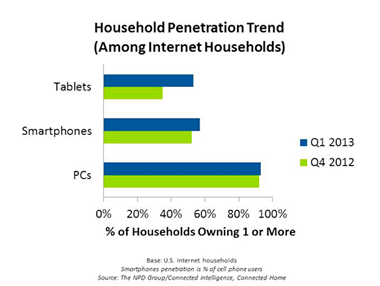 “It’s hard to believe that tablets and smartphones are still somewhat in their infancy,” said Buffone. “But as we have seen in just the past few months, there is significant potential for this market to develop further.”

How will the Samsung S 4 launch impact the market? Read John Buffone’s blog to get his take.

More than 4,000 U.S. consumers, age 18 and older were surveyed in the first quarter of 2013. The number of installed and internet connected devices includes those that deliver broadband applications such as computers, tablets, smartphones, HDTVs, Blu-ray Disc Players, video game consoles, and streaming media set top boxes.

Connected Intelligence provides competitive intelligence and insight on the rapidly evolving consumer’s connected environment. The service focuses on the three core components of the connected market: the device, the broadband access that provides the connectivity and the content that drives consumer behavior. These three pillars of the connected ecosystem are analyzed through a comprehensive review of what is available, adopted, and consumed by the customer, as well as reviewing how the market will evolve over time and what the various vendors can do to best position themselves in this evolving market. For more information: http://www.connected-intelligence.com. Follow Connected Intelligence on Twitter: @npdci.