Port Washington, NY, June 28, 2017 – By the end of 2020 there are forecast to be 260 million installed devices attached to the internet and able to deliver apps to TVs, according to the latest NPD Connected Intelligence forecast. This represents 31 percent growth in TV-connected devices over the forecast period, led by smart TVs and streaming media players. In fact, smart TVs will drive nearly half (48 percent) of installed internet-connected TV device growth through 2020, while streaming media players will contribute 31 percent of ownership growth.

The TV-Connected Device Forecast looks to shed light on how new generation smart TVs and evolved streaming media boxes and sticks will shape home entertainment. According to the forecast, by 2018, and through the end of the forecast period, household penetration of smart TVs will achieve relative parity with streaming media players as platforms delivering apps to TVs.

The rate of attaching connectable-TV devices to the internet is projected to increase from 73 percent in 2016 to 81 percent of installed units by 2020. This will eventually lead consumers to choose a preferred device, and result in diminished use for other devices. From January 2013 through January 2017, usage of installed internet capable TVs to access online content increased from 30 to 55 percent, demonstrating growing consumer interest in streaming video. As such, streaming media player original equipment manufacturers (OEMs), including Google, Roku and Amazon, continue to partner with TV OEMs to integrate their operating systems directly into displays. 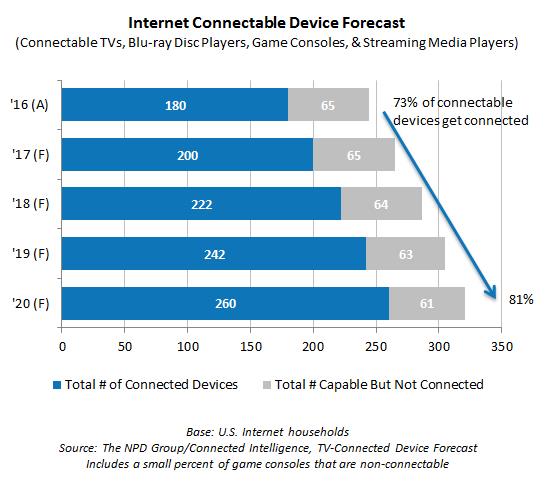 “All trends point to smart TVs and streaming media players driving the majority of growth in TV-connected devices. When you compound the increased usage for streaming video, it points to further dominance of these platforms, as they provide the premium content and ease of use consumers demand,” noted Buffone.