Smartphone Data Consumption is 44 Percent Greater on Larger Screen Phones, According to NPD 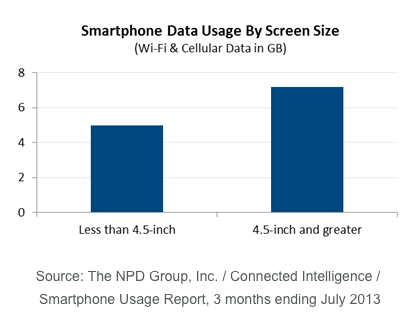 Smartphone penetration continues to grow as late adopters enter the market and the number of consumers opting for larger screens is growing. According to the Connected IntelligenceConnected Home Report, in Q3 2013, 61 percent of cell phone subscribers in the US used a smartphone.  Over the past year, the availability of larger smartphones has grown from representing only 11 percent of retail models at the end of Q3 2012, to 28 percent at the end of Q3 2013. As the availability of large screen smartphones has grown, so has data usage, which increased 19 percent in the same time period.

Most of this data consumption on larger phones is coming from greater usage of social media, navigation, video, retail, and music apps. Facebook, Google Maps, YouTube, Amazon (retail), and Pandora Radio are the apps most used among consumers with larger phones. 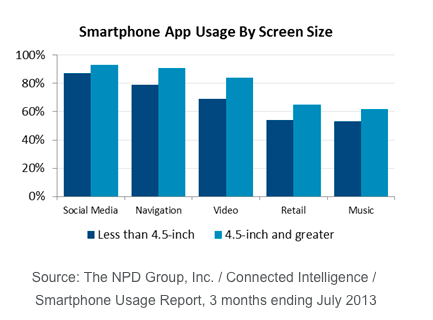 “OEMs are poised to continue increasing the product assortment and availability of smartphones with larger screen sizes in the coming years,” said John Buffone, director, devices, Connected Intelligence.  “Even though today larger screens represent a smaller part of the market, their relevance is increasing as consumers look for more ways to interact with content while on-the-go.  This is a win, not only for the manufacturers, but also for the carriers as data consumption and usage will keep increasing.”

Methodology
Smartphone Usage Report Data is sourced from an on-device meter "SmartMeter" leveraging a three month rolling panel that provides the equivalent base of 4,500 smartphone users. The panel is weighted and representative of the Android and iPhone U.S. smartphone base. The data was collected between May and July 2013.

Connected Home Report:
More than 5,000 U.S. consumers, age 18 and older were surveyed in the third quarter of 2013 for the Connected Home study.