Streaming Media Player Penetration to Reach 40 Percent of U.S. Internet Homes by 2017, According to NPD

Streaming Media Player Penetration to Reach 40 Percent of U.S. Internet Homes by 2017, According to NPD

PORT WASHINGTON, NEW YORK, JANUARY 26, 2015 – By Q1 2017, 40 percent of U.S. Internet homes will have a streaming media player, bringing the total number of homes with these devices to 39 million, according to the new NPD Connected Intelligence Connected Home Forecast.  At the beginning of 2014 (Q1) only 16 percent of U.S. Internet homes had a streaming media player. Ownership is on track to climb to nearly one-quarter of homes, 24 percent, by Q1 2015 when consumers report device ownership that takes into account their holiday purchases. 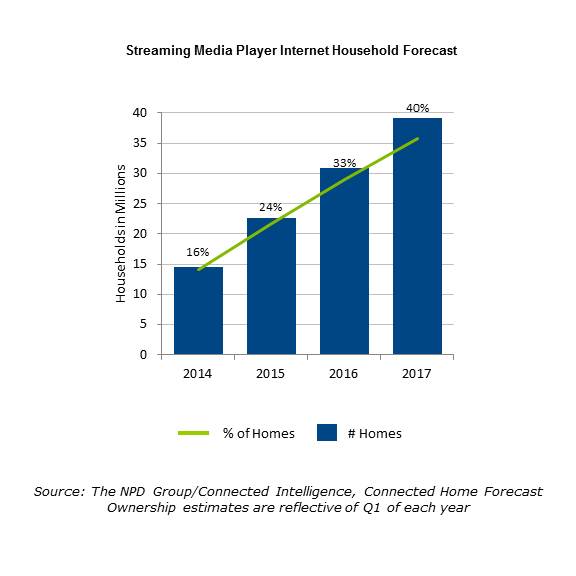 In its infancy, the streaming media player market was driven by growth from Apple and Roku, but over the past year and a half Amazon and Google have made a significant impact. In addition to streaming media players, TVs, video game consoles, and Blu-ray Disc players also deliver apps to viewer’s TVs.  Among these four device platforms, streaming media players are forecast to contribute the most growth, and TVs the second most growth, in installed and Internet connected TV devices over the next two years. This will drive the total number devices delivering apps to TVs up to 211 million by Q1 2017.

Not surprisingly, the increase in streaming media players helped boost the use of streaming video services.  According to the Connected Intelligence Application and Convergence report, usage of Amazon’s Prime Instant Video service saw the greatest percentage point increase, and all of the top five video services benefited from the growing streaming media device market.

“The rapidly growing streaming media player market, coupled with rising ownership of smart TVs and the new generation of game consoles is resulting in significantly more homes getting access to apps such as Amazon Prime Instant Video and HBOGO,” said John Buffone, executive director, Connected Intelligence. “Over the coming years we will continue to see a growing audience of TV viewers for streaming video services, authenticated network apps, and offerings such as CBS All Access that no longer require a pay TV subscription from a cable or satellite provider.”

The Connected Home forecast is based on NPDs quarterly Connected Home surveys conducted among more than 5,000 U.S. consumers, age 18 and older.  Using the NPD Consumer and Retail Tracking services, historical installed base reporting is mapped to sales trends for each device category. Coupled with internet connection rates, these data are used to project a view of the connectable and connected device installed base.

In Q4 2014, more than 5,000 U.S. consumers, aged 18-years or older took part in this online survey which asked questions about their usage of computers, smartphones, tablets, and connected TVs.

Connected Intelligence provides competitive intelligence and insight on the rapidly evolving consumer’s connected environment. The service focuses on the three core components of the connected market: the device, the broadband access that provides the connectivity and the content that drives consumer behavior. These three pillars of the connected ecosystem are analyzed through a comprehensive review of what is available, adopted, and consumed by the customer, as well as reviewing how the market will evolve over time and what the various vendors can do to best position themselves in this evolving market. For more information: http://www.connected-intelligence.com. Follow Connected Intelligence on Twitter: @npdci.