TRADE IN, TRADE UP, TRADE OUT: The Evolving Smartphone Trade-In Market

The smartphone trade-in market has moved from one of relative obscurity a year ago to become one of the most dynamic, leading tools that carriers and retailers use to drive new device sales. Unlike other markets that leverage trade-ins - such as other consumer electronics, or even car sales - the smartphone market is driven by multiple needs, including ensuring consumer loyalty to a carrier and potentially to a specific OEM’s brand, and to ensure that they have the best possible phone to support the carrier’s network goals.

The trade-in debate smoldered for years, but was reignited when T-Mobile launched its Uncarrier strategy in March 2013. This move introduced the separation of device and service to the mass market, rather than a prepaid experience, with unsubsidized (or close to unsubsidized) devices and no contracts. With device pricing now peaking well in excess of the traditional $200 limit, the need for a trade-in program was necessary. But T-Mobile was hardly alone; AT&T quickly followed up with a smartphone trade-in promotion that began in May. Soon after, seemingly everyone had some sort of revamped trade-in, ranging from retailers to carriers to OEMs. Most recently, T-Mobile, AT&T and (just a couple of weeks ago) Verizon Wireless have launched Jump, Next, and Edge respectively to help drive demand for new devices further. These take a slightly different approach to the smartphone replacement issue, but are generally in the same ballpark. 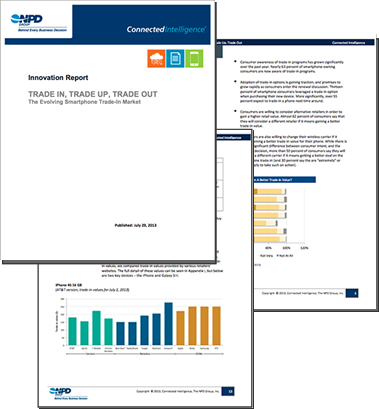 In reality, trade-in programs have been in place at carriers or through big box retailers for many years. The real catalyst that has made these programs effective has been the smartphone; this high-value device makes the trade-in segment more compelling than in previous years. Further, carriers are keen to ensure that consumers continue to upgrade these devices on a regular basis.

This report examines the current trade-in solutions in place, as well as consumer attitudes towards these programs. Traditionally, the vast majority of consumers have kept their old devices as “backups,” eventually resulting in a drawer full of old devices that won’t even work on the latest networks. While such an approach has few benefits, old habits die hard and all it takes is for one broken phone and the approach may be justifiable to the consumer.

For more information and pricing, please contact Ryan Hilton at ryan.Hilton@npd.com or call 617 444 9083.